Teltronic will once again participate in Critical Communications World, the major global event for the critical communications industry, which will be held in Madrid from 3 to 5 November.

The company has prepared a large deployment for an event in which it will have a 90m2 stand on which it will showcase its communication solutions for the transport and Public Safety markets, as well as for the industrial sectors with a proposal based on 5G technology that is configured as an optimal communications platform in the digitisation process towards Industry 4.0.

Thus, broadband solutions will have an important role in the Tetronic stand, but also the latest developments of the company on TETRA will have a prominent space. Such is the case of the MCBS, a TETRA outdoor base station that, through the use of SDR (Software Defined Radio) techniques, provides up to four carriers in a compact unit, offering the highest level of performance in a single lightweight and compact device, with up to 40W of RF power.

It will not be the only new product to be presented at the event by the company, since the RTP-800, a new generation on-board equipment that integrates TETRA, LTE and Wi-Fi for voice and data communications in a single rack, will also have its premiere. 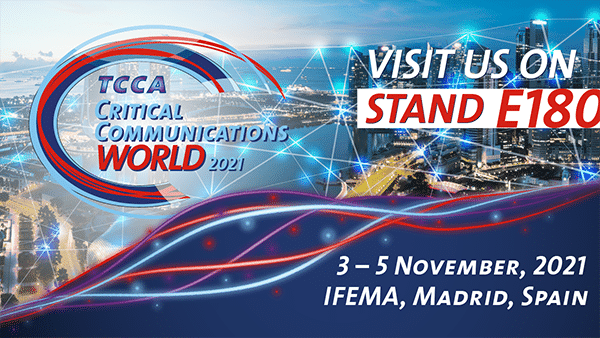 Thanks to a demo installed on a fully virtualised network, visitors will be able to discover the capabilities of Teltronic’s communication solutions and its portfolio, which includes terminals, infrastructure, Body Worn Cameras, on-board equipment and control centres.

In addition, Teltronic has prepared an extensive programme of webinars and live streams through its social networks, so that all those customers and partners who cannot travel to Madrid can also learn about the latest trends in the world of critical communications.

THREE NOMINATIONS AT THE ICCW AWARDS

Within the CCW framework, the International Critical Communications Awards, the most prestigious awards in the field of critical communications, will be delivered, and Teltronic accumulates a total of three nominations.

In the Transport category, Teltronic has two nominations: one for the deployment of a private LTE network and its integration with the CBTC signalling system on Line 3 of the Bilbao Metro, and the other, together with its partner in Australia, MCS Digital, for the TETRA communications system deployed for the Sydney Metro.

Finally, José Martín, CEO of Teltronic’s North American subsidiary, PowerTrunk, is a finalist in “Outstanding Contribution to Critical Communications”, a category that recognises the work of those individuals and institutions that have made a valuable contribution to the industry, with the respect of the sector and helping to increase the safety of users around the world.