For two days, the Teltronic headquarters has hosted the II Meeting of DMR Partners in Iberia, an event with which the company intends to present its main innovations and solutions on this technology to its partners in Spain and Portugal.

The sessions were attended by representatives of about twenty companies. They have a leading role because two round tables were scheduled in order that attendees were able to share their experiences and present some of their success stories with DMR. As a result, a very favourable environment was created, and the debate was very enriching, arising points of improvement to continue working. 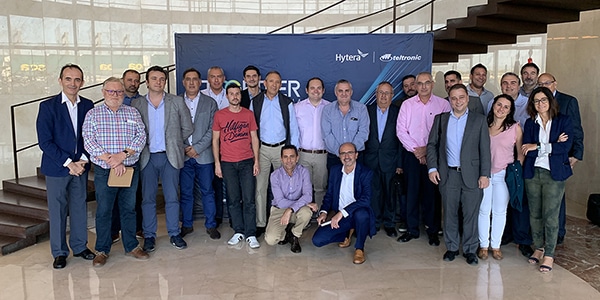 Later, Teltronic sales and Product Marketing staff explained the novelties and differential values not only of the terminals, but also of the dispatch centers.

There were also talks about the PoC and its big potential, fast deployment solutions that offer great value in emergencies, or DMR data applications. Likewise, an exercise was carried out to reveal where the future of radio communications will go considering aspects such as 5g or IoT.

Finally, this year there was also time for the awards, and Eagle Eye Electronics S.L won the Hytera Group fidelity award. The company’s CEO, Luis Escribano, received the award from Juan Ferro, CEO at Teltronic.