Teltronic has received the diploma accrediting its participation in the FRMCS Plugtests, interoperability tests organised by the European Telecommunications Standards Institute (ETSI), within the framework of the Mission Critical Services defined by the 3GPP for the railway sector.

The event tested some of the FRMCS functionalities defined in the 3GPP MCS standard included in releases 15 and 16. Teltronic participated as a UE (User Equipment) supplier with its RTP-800 on-board radio, demonstrating that it is prepared for these interoperability and harmonisation processes that are being promoted for the future deployment and operation of Mission Critical Services (MCS) in the field of rail transport.

The event was based on 3GPP, ETSI and IETF (Internet Engineering Task Force) standards,  and tested railways-oriented capabilities like Functional Aliases or or authentication and registration. 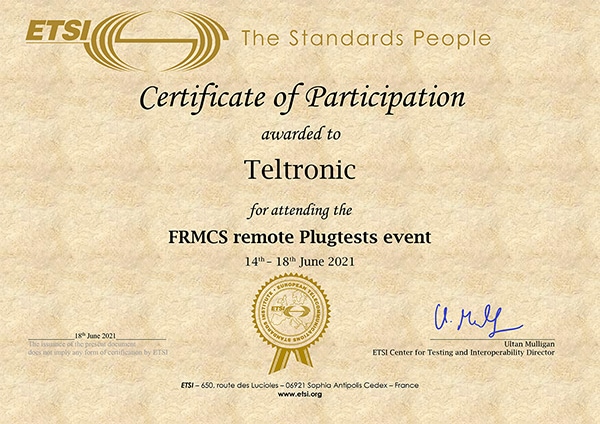 By means of participating in these plugtests, Teltonic has been able to assess the level of interoperability of its implementations, validating its understanding of the standards and demonstrating that RTP-800 was designed and developed in order to be part of the future railway communications.