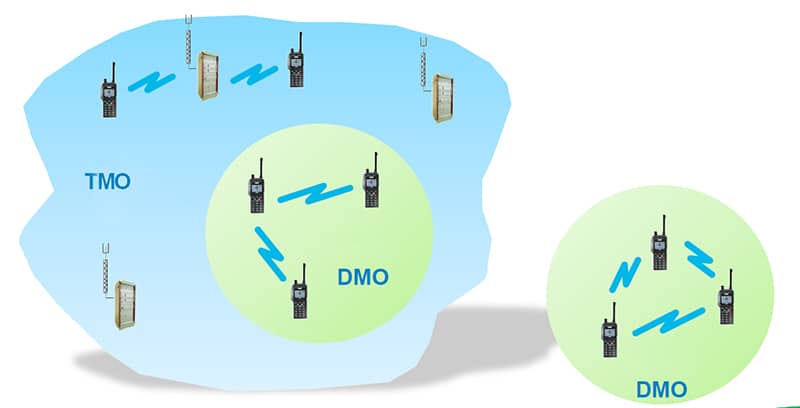 In radio communications, unlike Trunked Mode Operation, TMO, in which the transmissions are made through a TETRA network infrastructure, the DMO, Direct Mode Operation, describes the ability of TETRA radio terminals to communicate among them operating independently from the network, as if they were simple walkie-talkies.

This mode can be useful in scenarios that, although the users are within the coverage area of the network, have such a localized character that there is no need to use the global network to maintain the conversation. Imagine a situation in which a team of workers tries to repair a high-voltage cable, and one of them has to ascend while the other remains below. In this case, using DMO will allow both operators to speak without the risk that at a moment of the operation the network is busy.

In addition, it can be used in some work situations, accidents or exceptional circumstances. For example, during a chase, two patrol cars leave the coverage area but the two police units still have the need to remain in contact. The direct mode is what will allow both units to continue exchanging information.

However, the most frequent use of the DMO is to create an extension of the network allowing communications in areas where there isn’t coverage. Through gateways, DMO users can maintain contact with TMO users. In this way, the radios operate like mini base station that can provide service to others that are outside the network.

Thus, the direct mode allows users who are outside the coverage area to be contacted by the TMO, thereby improving communication capabilities and system coverage.

For this reason, the RF (radio frequency) power of the terminals is a very important aspect to be taken into account, since the greater the power output is, the greater will be the distance in which the users can be separated and talk without infrastructure. The 10w is widely used in mobile terminals, while in handsets, some such as Sepura’s SC20, can reach up to 3w, compared to 1.8 that have this type of portable terminal as standard.