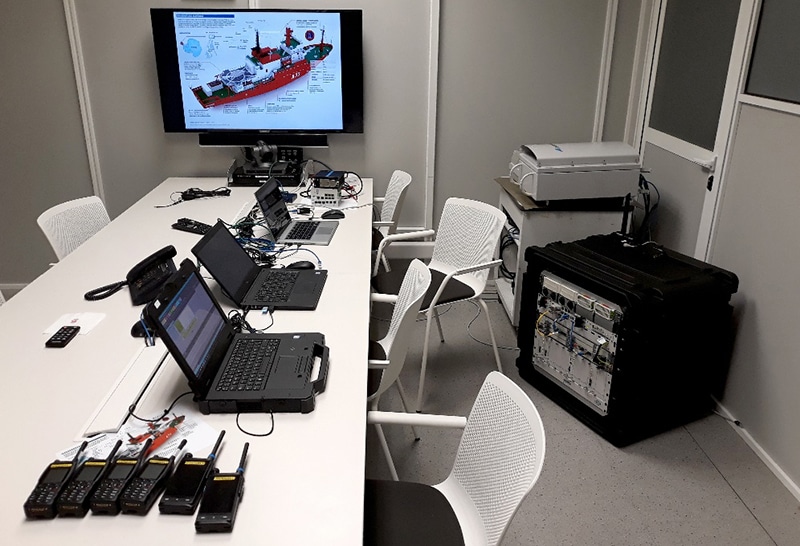 Some weeks ago, Teltronic reported the deployment of the first narrowband (TETRA) and broadband (LTE) convergent (using a single Network Management System and Control Node for both accesses) radio communication system put into operation in the world. A milestone that meant an important effort, in a process that we will develop through our blog. In this first post, we explain how the project came about, and how the first steps were at our headquarters.

It’s important to remember that the deployment was carried out within the framework of the GALILEO PRS project of the General Directorate of Armament and Material and the Navy in Antarctica, which is aimed to carry out a demonstrator that validates safe satellite navigation.

To this end, the project is testing the concept of the PRS (Public Regulated Service – robust, encrypted and controlled access service for government applications) signal of the Galileo Satellite, and the research project tests were developed during the annual expedition that the experimental ship of the Spanish navy, Hespérides, makes every year to the Antarctic continent.

The Hespérides project set out a twofold challenge. On the one hand, it was necessary to send broadband data information, for its subsequent storage and analysis in the warehouses of Hesperides, about the correct operation of the Galileo system, combined with the narrowband operation available for the management of voice communications. On the other hand, it was necessary to design a system to meet the demanding requirements of tactical deployments, such as the environmental conditions of salinity and temperature, as well as high resistance to vibrations and shocks due to the fact of traveling installed on a ship .

Of course, the basic ones were the main factors of the final solution, with a bandwidth of not less than 4Mbps and with a minimum distance required to penetrate up to 4 kilometers on the coasts of the white continent, always depending on the deployment of the system in a frequency allowed in Antarctica in band B28.

After the definition of requirements and the development of the system for tactical deployment, equipment validation tests were carried out, thereby assuring the correct operation at Teltronic facilities together with staff from GMV, technological multinational to which the Ministry of Defense Spanish had commissioned the project.

The equipment and operation were ready to be deployed on the flagship Hespérides of the Spanish Navy.