The 4th Annual 2015 International TETRA Awards, sponsored by TETRA Today Magazine and the TETRA and Critical Communications Association (TCCA), took place on March 5th at the prestigious Landmark Hotel in London. Once again, the event brought together many of the most renowned members of the mission critical communications industry, as well representatives of TETRA companies coming from all around the world.

TELTRONIC, as one of the major players in the TETRA industry, arrived at the ceremony with 4 nominations in next categories:

Finally, TELTRONIC secured the award in the category ‘Best Use of TETRA for transport’. This award was with respect to the 2014 expansion of the existing New Jersey Transit (NJT) TETRA network provided by POWERTRUNK, subsidiary of TELTRONIC in North America, in order to directly support NJT bus and light rail transportation operations in the days leading up to and on the day of Super Bowl XLVIII last year. “The Super Bowl XLVIII has been an excellent case to demonstrate TETRA’s outstanding capabilities, speech quality, and reliability during the most important annual sport event held in the United States”, said Jose Martin, CEO of POWERTRUNK.

In addition to augmenting TETRA network capacity in the areas surrounding Newark and New York City, special attention was also given to assuring indoor TETRA network coverage for NJT’s Secaucus Junction Station, as well as across the Hudson River in New York City for NY Penn Station and the Port Authority Bus Terminal, since these were the major transit hubs for thousands of spectators traveling to and from MetLife Stadium.

The Academy Bus Company, which provides service to New York City and New Jersey in cooperation with NJ Transit, also acquired and installed a TETRA base station in central Manhattan and which is also integrated into the NJT TETRA network.

In addition, NJT’s Super Bowl Emergency Operations Center (EOC) was equipped with MDT-400 TETRA radio equipment integrated with Telex IP-223 gateways for use with the Telex C-Soft console solution. This, together with about 300 HTT-500 TETRA portable radios, allowed NJT Customer Service «ambassadors» and Bus Operations representatives to control and assist passenger flow during the event.

The integrated GPS modules of the handheld and mobile TETRA radios, and the use of TELTRONIC’s Synchronous Data manager (SDM) application furthermore enabled NJT dispatch operators to monitor the movement and positions of all users in the network in real time, thereby enhancing security and public safety.

One of the judges of the International TETRA Awards commented that this project was an «Excellent example of a TETRA project expansion to support a transport operator during a major event». 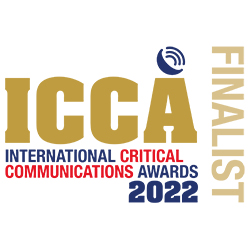