• The communication infrastructure was deployed in Antarctica, so the equipment had to endure the most extreme weather and environmental condition
• The company has participated in a research project led by the technological multinational GMV that intends to study new PRS (Public Regulated Service) navigation concepts over Galileo satellite systems

Teltronic, a Spanish company backed by more than 45 years of experience offering professional radio communications solutions, has deployed the first narrowband (TETRA) and broadband (LTE) convergent (using a single Network Management System and Control Node for both accesses) radio communication system put into operation in the world. The company completed this milestone in Antarctica, so its equipment had to endure the most extreme weather and environmental conditions.

The deployment was developed within the framework of the GALILEO PRS project of the General Directorate of Armament and Material and the Navy in Antarctica, that the Spanish Ministry of Defense commissioned to the technological multinational GMV in order to perform a demonstrator that validates safe satellite navigation. For this purpose, researchers are testing the concept of PRS signal (Public Regulated Service – robust, encrypted and controlled access service for government applications) of Galileo, the European satellite radio navigation and positioning program developed by the European Union jointly with the European Space Agency.

All the tests of the research project were made last year during the annual expedition that the Spanish Navy’s oceanographic research ship Hespérides carries out every year to the Antarctic continent. In order to carry out this expedition successfully and to develop the project tests, a robust communication system with voice and broadband data transmission capacities was required to allow communications among staff members, but also the massive and real-time data transmission from systems installed on land to the control centre and databases installed on the ship. 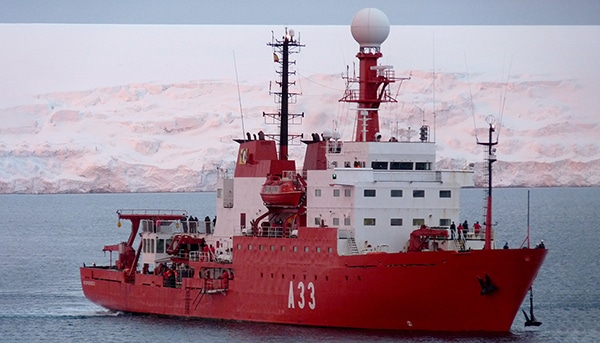 The communications solution selected was a hybrid convergent TETRA + LTE system, and Teltronic was responsible for deploying it onboard the Hespérides, which sailed within a radius of 5 km from the work zone (both on land and an auxiliary vessel) where it was placed the PRS satellite signal receiver, together with the associated communications equipment: a TETRA-LTE dual terminal.

Teltronic installed a complete solution based on its eNEBULA communications infrastructure, including the central node that provides intelligence to the network, the base stations that spread coverage to the operation area, and the dual communication terminals.

In this way, the LTE access allows the transmission to the Hesperides of the positioning data that is sent from the Galileo and that is received on the ground by the PRS receiver and, at the same time, the TETRA technology serves to support voice communications in which the research staff and crew members participate.

This experience means an important milestone for the evolution of critical communications in professional environments, with TETRA as a reference standard and LTE as a logical evolution towards broadband applications, but always maintaining the rigorous requirements in terms of availability and security demanded by environments such as this project. With real deployments like this, and its robust TETRA + LTE hybrid infrastructure (NEBULA), Teltronic demonstrates its leadership in the market of private critical communication systems

The Oceanographic Research Vessel (BIO) “HESPÉRIDES” is the only Spanish vessel designed to conduct multidisciplinary scientific research in all the seas and oceans of the planet, including the Arctic and Antarctic Zones. The main activity of the ship focuses on the southern summers, during which it conducts Scientific Campaigns in Antarctica and provides the necessary logistical support to the endowments of the Spanish Antarctic Bases (BAE) “Juan Carlos I” and “Gabriel de Castilla”, providing fuel, material for the vital functioning of the facilities, and the necessary supplies at the different scheduled scales. The rest of the year its activity extends to all the oceans and seas of the planet, mainly Atlantic, Pacific and Mediterranean, providing support to all types of scientific campaigns.